Get your FREE copy of the entire book in PDF, EPub, or Kindle format!

What is your Happy Graph?

Buddhism’s Four Noble Truths do a brilliant job of explaining the root cause of suffering as attachment to one’s desires, as follows:

Letting go of one’s attachments – or DETACHMENT – is not an easy feat, however.  And each of the eight steps can take a lifetime to master.  But before any of that is attempted, one needs to start by getting on board with the first two points.

Elizabeth Gilbert, one of my favorite authors, wrote in Eat, Pray, Love that she didn’t understand the concept of detachment.  She couldn’t get behind the idea of not wanting things, people, or experiences, she felt it would mean she was not fully living.

I am not surprised.  She is a creative and energetic individual with many interests, and it would be hard for someone like that to relate to the austerity of such a practice.  She might have changed her views on it since way back then, but I know many other people who have started exploring spirituality and say the same thing.  The concept of detachment is not easily grasped by those actively living their best life.

I will confess that I, too, find it a bit difficult to follow.  I am still attached to things like my sheepskin blanket and No Pudge Fudge and the Internet.  Surfing uselessly for hours on end makes me happy!

However the general concept of detachment is one that I also happen to find quite logical, at least in theory.

While the Four Noble Truths introduced the concept, it was a lecture by the late Swami Chinmayananda, which I had the privilege to hear, that finally made the concept click for me.

I will attempt to replicate his spiritual teachings here, but because I am right AND left-brained, I do better when analyzing ideas through charts and data.  The following is what I heard Swamiji say, plotted by me visually for better understanding and impact.  I call it The Happy Graph. 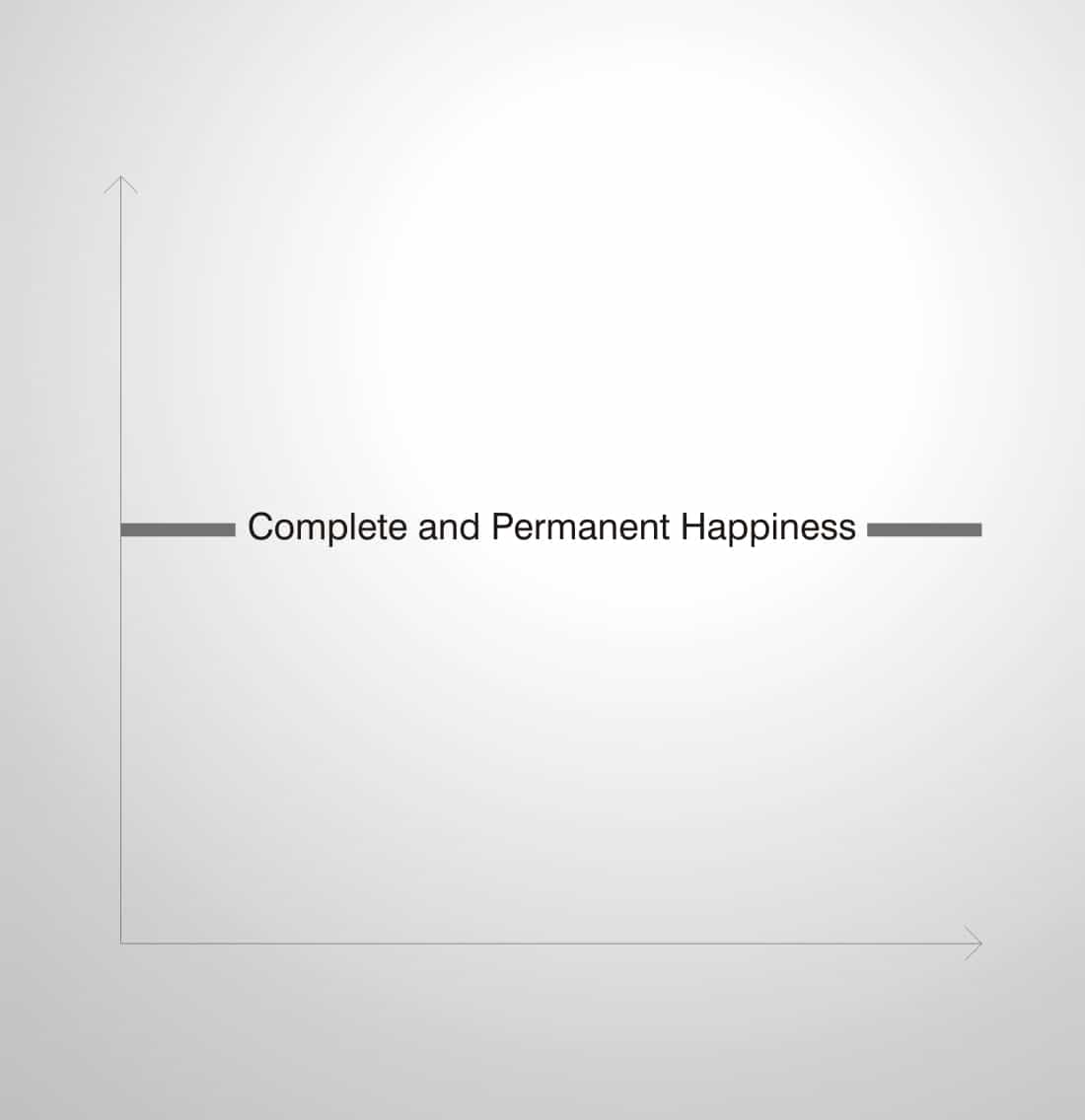 An eternal, complete Happiness would resemble a straight line that does not waver, or go up and down with time.  This is what we are hoping to achieve – permanent Happiness.  Or conversely, as the mirror of that picture – detachment from Suffering.

Now let’s say we start specifically plotting events that bring us Happiness.  Let’s start with objects or a few of our favorite things.  One of my most favorite objects is (no surprise for those who know me) . . . chocolate.  I’m going to plot it on the graph, but because some men or general weirdos might not completely align with that, I’ll add beer as well.  (Whoever doesn’t like chocolate probably hates puppies and babies too.)  I’m also going to plot the data point for the ramifications of having too much chocolate and beer, which can be pretty hefty weight gain.  As follows: 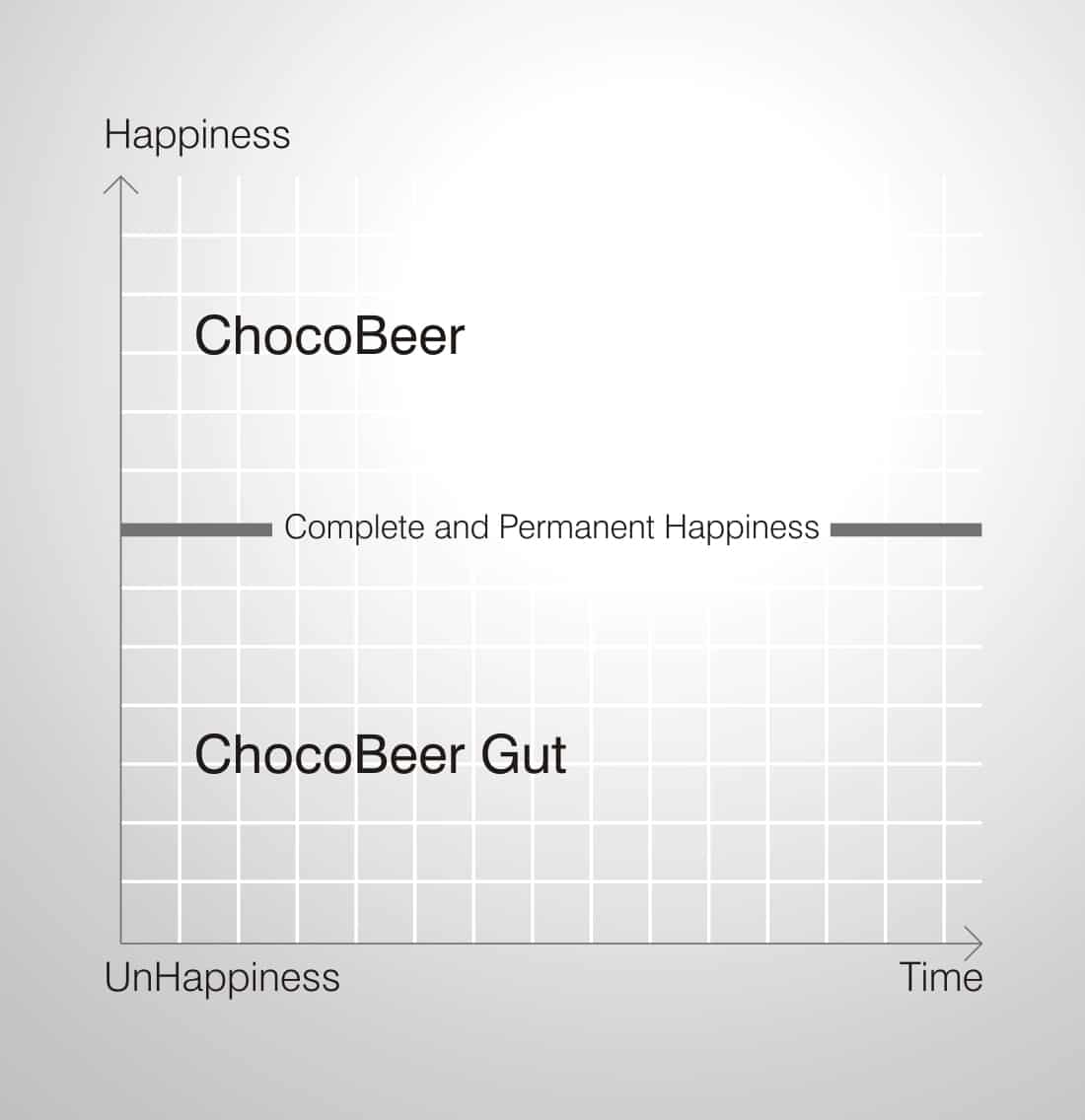 Now what else brings us Happiness?  Let’s try something different from an object – say an event, such as a promotion at work.  A promotion can be exciting because of the raise and corner office and increased power that it might bring.  But it can also result in extra responsibility and longer hours.  Plotting various sources of Happiness, such as a new iThing, car, vacation, or even our loved ones, along with any ramifications the object, place, or person could bring might look as follows: 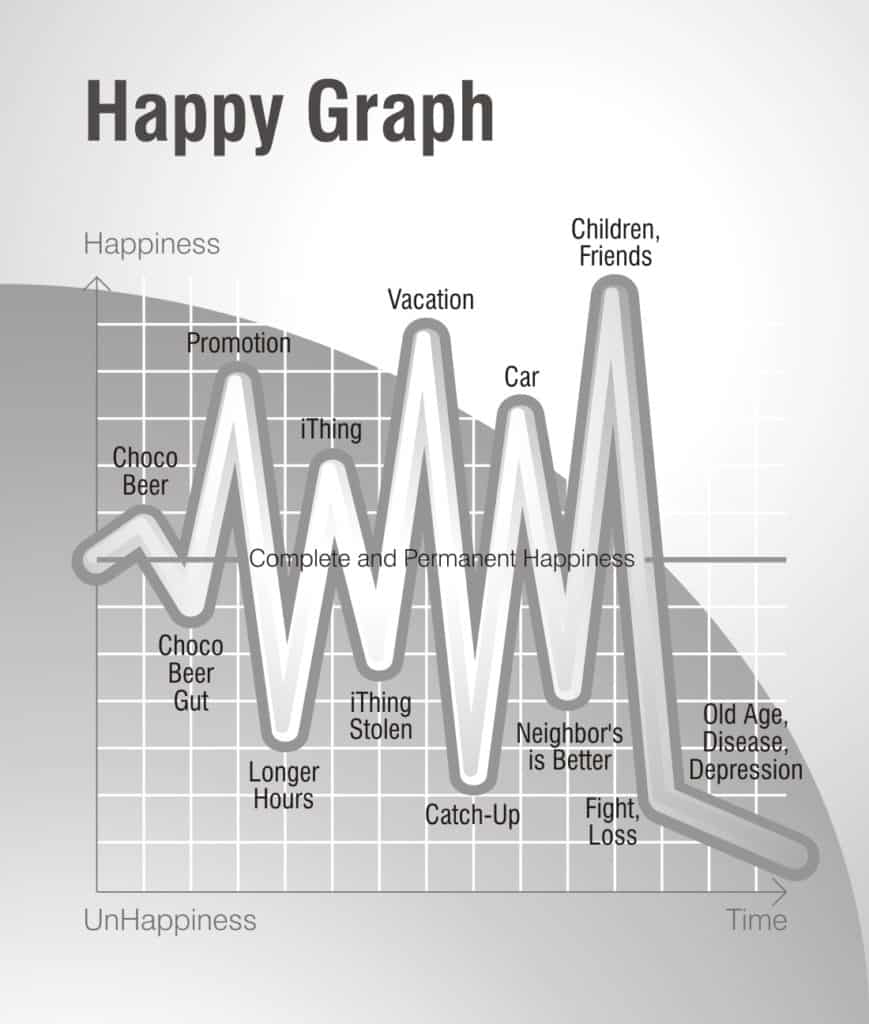 As we can see from the chart, there are many external sources and events that can give us pleasure.  The list is endless.  However for most of us, the same sources of Happiness can be a source of UNhappiness as well.  An iThing can be stolen or lost, a brand new car might lose it’s sparkle the next day when a neighbor buys one model up.  Vacations can result in a substantial backlog and a need to catch up again upon return.  Even loved ones such as family and friends can get sick, move away, or God forbid, pass on.  Nothing external ever stays the same, it is always subject to change, either in reality with a physical change (car dent) or internally, inside one’s mind in terms of how we perceive the object (inferior car model).

The most volatile of these external factors is time, which is always running and never stays still.  Youth may bring vitality, energy, and dreams but that quickly gives way to old age, disease, and death.  The physical body – the flesh and blood cage that surrounds our soul and mind – and our ego and identities that we assume while we are alive in the world – all of them are depreciating assets that disappear over time.

When looked at from this perspective, it is easier to understand that attaching one’s INTERNAL, PERMANENT happiness to EXTERNAL, TEMPORARY factors is an oxymoron.

How can we expect to derive something permanent – a straight, constant line of Happiness – from something temporary that causes peaks and valleys in the Happy Graph?  A Happiness that is attached to a factor that is guaranteed to change, is also going to change, just by default.  Once we understand that, detaching our Happiness from temporary, volatile factors now seems like a logical process to follow in the search for complete and permanent Happiness.

But here comes a valid argument against detachment – if one is able to detach from everything in life, as Liz Gilbert wondered, what is there left to live for?  According to Swami Chinmayananda, the answer – everything.  HOWEVER . . . the trick is to enjoy all of the blessings and rewards that come along in life but NOT be as sad or affected if they go away.  Not all of us need to be ascetics and renounce the world.  Instead, recognizing that it is a given that external factors come and go and being able to keep a constant, unwavering line of Happiness instead of going up and down with life’s unpredictability, is the way to remain detached and yet still stay involved in the world and enjoy the fruits of one’s labor.

Easier said than done, trust me, I get it.  I’m not there completely myself.  I’m not ready to let go of my many adult binkies.

But what is the alternative?  Allow ourselves to ride the biggest and scariest roller coaster out there, called LIFE?  Some would say yes, in order to experience the incredible highs, one also has to dip down to the deepest lows.  There’s nothing wrong with that, each person has to decide for themselves what they want their Happy Graph to look like.  My very extroverted friend took one look at that straight line that I aspired to and said it reminded him of a no pulse EKG.  🙁

I respect his morbid viewpoint but I don’t see it that way for myself.  I took my turn on the world’s tallest roller coaster when I was young – from riding high with enthusiasm as I pursued the next entrepreneurial venture with great hope – to the abject disappointment when I failed – to the motivational speakers urging me to dust myself off and not accept defeat – with the cycle repeating itself over and over.  I experienced the usual desires for a big house and nice gadgets, gaining them in my early 30s, then losing them again once I was divorced.  I spent hours investing in numerous friendships that I later outgrew, or fretted over bonds to family that were once strong and then started to weaken.  Many times I’ve experienced maya (a Hindu term), similar to the illusion of an oasis in the desert, and once reaching it, seen it dissipate into thin air.  Been there, done that.  I don’t have energy for all of that chasing anymore.  I’m sure age is a part of it, but I’m slowing down now and just chilling by adding more whitespace to my day.  For the Bollywood fans out there, I’m channeling my inner Zeenat from Dum Maro Dum*.

The Power of the Anecdote

When the Soul gets Lost in Science

If I lose my home tomorrow to some of the more frequently occurring global warming events like hurricanes and floods, I’m not saying I won’t be sad and disoriented.  I can’t even IMAGINE the trauma.  But I’ll probably be able to deal with it in a much calmer way than I would have a few decades ago.  I would love to become well-known so I can share my ideas with more people, but if I don’t become the next Salman Rushdie with my controversial spiritual publishings, maybe that’s a good thing.  I’ll be able to keep spouting whatever I want and not have a fatwa on my head.  If I don’t end up in another relationship, hallelujah, one less man-baby I have to cook and clean for.  🙂

Call it jaded, or call it mellow, my Happy Graph line doesn’t move up and down as much anymore.  Because I’ve had the lightbulb realization – in a way I’ve never had before – that external factors will always be changing.  One can’t control that.  And it’s an oxymoron to expect permanent, complete Happiness from temporary, changing sources.  Just like the Four Noble Truths, the Happy Graph makes it clear – letting go of your binkies is the ultimate path to enlightenment.

*A famous Bollywood song from the 70s showing actress Zeenat Aman smoking and taking drugs and singing a hypnotic song while high.

Share on FacebookShare on TwitterShare on Linked InShare by Email

What Buddhist sutra did you get this from? Focus your desires on positive actions.

Happiness is a desire. Detachment is to end suffering not cause happiness.

Detach from that phone in your hand. Yes, I am talking to YOU

(NOTE:  We hate spam and will never sell your email!)